I’m not one overly attached to my truck. I love it, don’t get me wrong. It’s very comfortable, drives well, and the air works great. This being said, if you asked me my favorite vehicle I’ve owned… I’d be at a loss.

I just don’t get emotional about vehicles.

I did love my Bronco, and I have great memories with “her.” From taking the top off and driving to Fort Lauderdale beach to off-roading with a variety of people (including my Mom) throughout South Florida. Great truck.

END_OF_DOCUMENT_TOKEN_TO_BE_REPLACED

So, a few friends were visiting the bakery the other day and I was showing the young daughter around (I was sneaking her some pretzel M&M’s, but that stays between us). On the wall near the ingredients, I have a photo of Yeni holding our bear, me doing something, and Forrest (on my computer monitor– he’s my desktop). She asked me about the picture.

I told her, “That picture is everything I love.”

She looked at me, thought, and asked, “isn’t your dog dead?”

Sometimes the answers come to me quickly. This was one of those times.

“Yes, but that doesn’t mean I stopped loving him.”

I’ve owned a few Ford trucks. For a long time, I was very brand loyal to Ford– but that’s another story. This story is about my ass sitting behind the wheel for 100,000 miles, again. It may be the first time that this truck hit the 100k mark… but it’s not mine. 🙁

The first car I took past 100k was my 86′ Toyota Celica. Got that car used in 1990 (30k miles) and drove it until the axle disintegrated around 150k. I bought my Ford Ranger new off the lot in ’96. At 150k, I traded her in towards the Expedition I’m driving now. Bubba was a good ride… protected me when I got hit by a Greyhound bus, and Forrest just loved sticking his head out the rear window.

END_OF_DOCUMENT_TOKEN_TO_BE_REPLACED

In case you haven’t realized, Yeni and I have opened a bakery in Gainesville, FL. We’ve named it Dream Day Cakes and, well, you MUST COME BY! First, let me tell you a little story.

Once upon a time, in the land of North Central Florida, there lived a boy named Fred Posner. Fred, a large, rotund, bald boy, loved eating, riding motorcycles, and living la vida loca. Not so much listening to La Vida Loca but actually living it.

END_OF_DOCUMENT_TOKEN_TO_BE_REPLACED

Can you guess which WiFi network is mine?

I’m no stranger to the fun and joy that comes from dog ownership. Let’s not forget that Forrest was 115lbs and as regular as could be. We tried (well, he couldn’t care actually, more realistically I tried) to be very considerate of private property when making our rounds. Now I don’t want to go off on a rant here, but…

END_OF_DOCUMENT_TOKEN_TO_BE_REPLACED

He would have been 15 today… sometimes it’s still hard to believe it’s been almost 3 years.

Happy Birthday Forrest. I still love and miss you.

So today (December 20th) marks the 2nd Anniversary of Forrest’s passing. Last year, I rode the Harley out to Cedar Key, Florida and threw a duck into the ocean.

Well, when I graduated UF back in 2006 (Go Gators), my parents threw an open house graduation party for me. My mom decorated the house with an army of little foam ducks wearing a graduation cap.  Forrest loved them. He absolutely loved them and would quickly remove the head from the body, shake it around a little bit, find a new duck, lather, rinse, repeat. When we returned to Gainesville, I must have brought about 20 ducks with me and every now and then I’d leave one for him to seek and destroy.

After he passed away, I had a handful of them left, so on 12/20/2007 I rode out to Cedar Key on the bike (read the post) and had brought one of the ducks with me. I didn’t really have a plan; I was just pretty sad and seeing the ocean always makes me feel better.

When I got to Cedar Key, I had the duck in my hand and was just kind of squeezing it (like one of those stress relief balls). For no particular reason I reached back and hurled the duck as far as I could into the ocean… watching as the duck “swam” out to see. I don’t know why, but I loved it. And I said I’d do it every year I could.

This year, I happened to be in San Francisco on 12/20, which of course wasn’t an issue — since the ocean is right there. I had brought a duck and coincidentally my mom also brought one out for me (there’s a long story there… but in 5 words or less, Great minds think alike). We went out to the Giants stadium and we launched the ducks into the Pacific.

And with that, I was reminded how much I still miss my dog.

Yesterday, we woke up at 5am and headed through the snow to take me to the airport. Even after spending 5 hours on the tarmac (and being de-iced from a de-icer named Fred), I still have to say I love American Airlines.

Don’t get me wrong, I do not like flying. I hate almost everything about it… From taking off your shoes to the airline reps behind the counter (has anyone ever had a positive experience with a gate agent??), from flight attendants to busy crowds, flying today for me is a last option. I’d much rather drive than fly on any given day, and, if time isn’t a factor (like Thanksgiving), it’s exactly what I do. I remember once being excited about flying and loving going to Airports, flying in airplanes, and just traveling by air. Loved it. Much like my hair, those days are gone.

But, I digress. So, if I have to fly, I like American Airlines. Let’s put it this way. When I’ve missed connecting flights from other airlines, getting a new flight was a hassle. Hassle and drama, drama, drama. With American, by the time I got off the plane, they had already reserved me a seat on one flight and put me on standby for another. (I ended up getting the standby 🙂 ).

Anyway, I made it to San Francisco and had a great dinner with my sister, Scott, my parents, Tovah, David, and Scott’s mother and father. We were celebrating Scott’s graduation from college and was a great reason to see so many people that I love.

On plan for today? Dim Sum with the family and then throwing a duck into the ocean in remembrance of Forrest (today’s the 2nd anniversary). Also, it’s the first anniversary of Shadow’s passing.

Well… I couldn’t sleep. So I loaded up the final bags and hit the road. Now I can slow down and wait for the sun to rise. Been a while since I rode with the puppy… 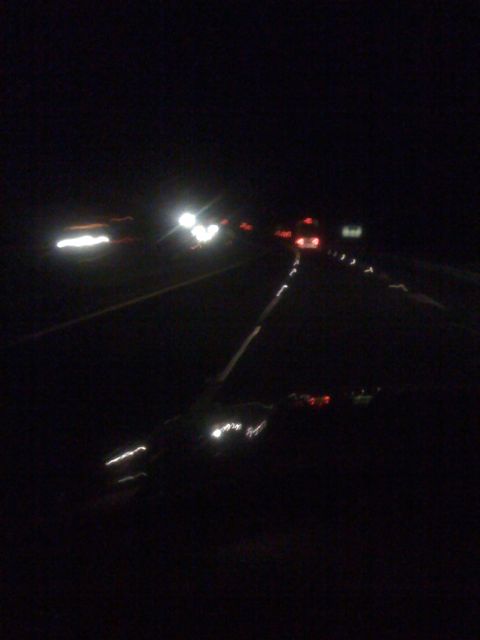 A year to the day of Forrest’s death, he is joined by his only friend…. Shadow.