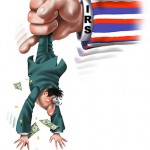 The smartest thing I have ever done was not leave Florida permanently. After spending 20 plus years living and working in Florida, I’ve certainly seen my share of embarrassment. From Terry Schivo to Elian Gonzalez, the 2000 election to the Anna Nicole Smith Baby Daddy trial, Florida certainly helps give late night talk show hosts a punch line now and then.

But this isn’t a post about Florida. This is a post about two law makers in Michigan that want to raise income tax.

Right now, the State of Michigan has the highest unemployment rate in the United States. Right now (March 2009), the Michigan unemployment rate is 12%. And with GM getting ready to lay off thousands more in May, this number will rise quicker than it will fall.

So, with 12% of the state unemployed and (as the media reminds us hourly) one of the hardest economic times we’ve seen, Representatives lma Wheeler Smith (D-Salem Township) and Rebekah Warren (D-Ann Arbor) are proposing that income tax be raised by more than a percentage point.

You see, unlike Florida, Michigan taxes the income of residents. So after you pay your Federal Income Tax, you get to make another check for the State. Right now the income tax for Michigan is 4.35% of your income. If Representatives Smith and Warren have their way, it will rise to 5.5 percent. What will this money go to you ask? They want to provide free college tuition to residents.

Don’t get me wrong… I’m all for higher education. But, I’m also someone who worked full-time while finishing my degree. I believe that college serves a great purpose but also isn’t for everyone. And more importantly, it’s not for the hard working citizens to pay for everyone to get a college education. The majority of students either work hard to get loans, get money from Mom and Dad, use financial aid to pay for college. The nice thing there is that when you have to answer to yourself (or to Mom and Dad) you hold some accountability. But that’s another discussion…

What I truly don’t understand here is how, when unemployment is so high, two lawmakers can actually believe that raising taxes will be a good idea. Here’s an immediate idea… all state representatives should earn a salary of $1 per year. Instead of making the position a full-time job, Representatives should be required to earn their income like the common citizen and instead serve the republic out of honor, pride, and sense of duty.

The Founding Fathers of our country expected Congress to be a sacrifice and not a full-time job. The pay rate of a Federal Representative in 1789 was $6 a day (and payment was only while Congress was in session). In today’s world, that would amount to around $1,500 a year. Sadly, the State and Federal representatives earn considerable more.

Perhaps this is a perfect time for nostalgia. After all, perhaps the best way for State and Federal lawmakers to better the economy is for them to depend on the economy for their livelihood — you know, like the citizens do.

The government who robs Peter to pay Paul can always depend on the support of Paul. — George Bernard Shaw

Once upon a time, government budgets were balanced, our money was sound, the streets were safe, and taxes imposed by all levels of government took less than 10% of our income. — Harry Browne