When Yeni and I were dating, her apartment used Comcast for Internet. Like armies of other customers, I experienced numerous problems and after hours on the phone expressed my outrage on Twitter.

I didn’t expect assistance. I simply wasn’t happy and wanted to express my anger, to… well, to the entire world. Surprisingly, my small tweet was noticed by Comcast, who replied to me, contacted the appropriate people, and actually resolved my problem.

Shocked? So was I.

I tell you all of that to tell you this…

Ben Tobias (@GPDBenTobias) is the Frank Eliason for Police.

If you know me… you will know how significant the following statement truly is… The Gainesville Police Department does an AMAZING job of using social media (especially Twitter) to engage the community.

I have a history with the Gainesville Police Department and have been vocally critical on the web, social media, and in print. I won’t get into all of that here… but let’s just say there was a website or two involved.

Officer Tobias (who I’ll call Ben from here on) is the current GPD spokesperson and as such, runs the department’s twitter account (@GainesvillePD). In the last two years he’s gotten some great press for handling a complaining jaywalker, answering a request for mary jane, and handling a distracted driver not wanting to share the road.

Mind you, these examples are just the tip of the proverbial iceberg regarding how well Ben handles the police twitter account. He uses humor, sticks to a point, and keeps it very professional. The jaywalking professor? He ends up thanking Ben for the conversation.

That jaywalking conversation got picked up on blogs, re-tweeted, discussed by the media, and low and behold… a little jaywalking detail gets incredible exposure. The main point of a detail like this is to get out the message… making this incredibly successful.

Ben provides a great example of how to properly engage with your audience on Twitter. For an example of How Not to Twitter, one must simply look at the Alachua County Sheriff’s Office (@AlachuaSheriff).

Quick background: Recently, a motorist decided to shoot at a Florida State Trooper on I-75 in Alachua County. The resulting closing of the highway and capture of the shooter resulted in national news exposure. As such, the spokesperson for the Sheriff’s Office (ASO) has been engaging in social media with updates.

ASO then tweets to “see the updated information” with no link to see an actual update. People, such as UF’s Chief Meteorologist Jeff Huffman (@HuffmanHeadsUp), ask ASO where exactly the update might be located.

No response from ASO.

I retweet the update and ask Ben, “@GainesvillePD can you please teach ASO how to Twitter?“… which gets this response: 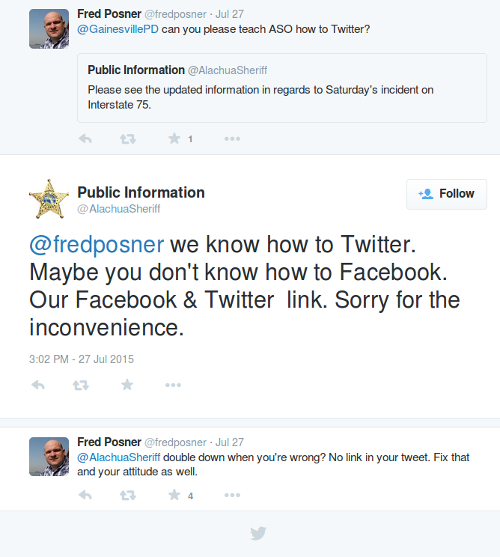 Now, attitude aside… there’s an amazing irony when you are called out for not sending a link, claim you know what you’re doing (and the other person doesn’t), and then demonstrate

yet again that you don’t know how to put a link into a tweet.

Here’s the main issue… no humor, no professionalism, no je ne sais quoi,…

How does this response help your organization? It doesn’t.

What went from a nothing tweet was re-tweeted and seen by thousands (my tweets each had over 1500 views as of this post). The tweet was posted to sharing sites (like reddit) and the conversation wasn’t about a shooter, wasn’t about the update… it was about the poor response and attitude of the spokesperson.

ASO no longer controlled the message. They were now the butt of the joke.

Incidentally, the response from Ben was funny and professional. Proving again, that proper use of social media is powerful.

ASO shows that improper use is just as powerful… and a great demonstration of how not to use Twitter.

Join me in Orlando for Astricon 2015 (previous)
(next) Independence Day